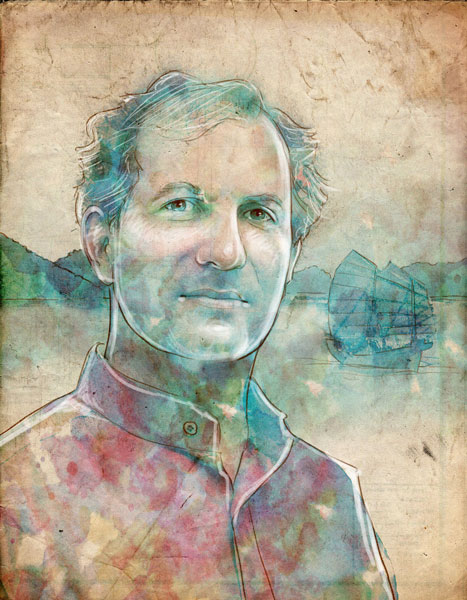 Larry Feign began disappointing his mother, who always wished he was a brain surgeon, from age seven, when he started writing and publishing stories and cartoons, and never stopped. Mama wasn't satisfied when his cartoons appeared in such insignificant journals as Time, The Economist, Fortune, and the New York Times. Or when he directed animation for obscure little companies like Cartoon Network and Disney Television. He published only 17 books and received a bunch of awards and fellowships...so what? All of this only postponed her goal of uttering the magic words: “My son the doctor.”

Larry Feign began his career as a caricature artist at Honolulu’s Waikiki Beach, later moving to Los Angeles to work for DIC Animation as a storyboard artist for the “Heathcliff the Cat" TV series. In 1985 he visited Hong Kong, intending to stay for two weeks, and ended up staying and making a name for himself as a cartoonist. His Lily Wong daily comic strip was considered a bellwether of life and politics in the territory, and was reprinted widely around the world. His first book, Aieeyaaa!, became the best-selling English-language book in Hong Kong publishing history. In 1997 Larry was commissioned by Britain’s The Independent to chronicle in cartoons Hong Kong’s final 100 days under British rule. His satirical commentary about the Hong Kong handover was Time Magazine’s first-ever full-page cartoon essay.

During a two-year hiatus in London, Feign illustrated for various magazines, before returning to Hong Kong to write and direct animation, as well as write for magazines. He has received writing fellowships and grants from the MacDowell art colony in the USA, Fundação Obras in Portugal, and the Hong Kong Arts Development Council. He also writes humorous children’s books under the pen name M.D. Whalen.

Larry is married to the clinical psychologist Dr. Cathy Tsang-Feign (at least there’s one doctor in the family). They have two perfect children, two dogs, and the occasional snake in the garden.